Our Native Helm feature utilizes the Helm binary to deploy charts instead of kubectl apply. This helps support Helm lifecycle instruments such as Helm Hooks and Weights.

Processing Helm charts for the app manager is accomplished with five high-level steps:

1) Check for Previous Installations of the Chart

The app manager checks previous versions of the installed app, checking if the chart has been installed previously without Native Helm.

Note: We do not yet support migrating existing app installations to Native Helm installations. Until migrations are supported, the recommended path is removing the application from the Replicated App Manager and installing fresh with Native Helm. PVCs will be removed in the process -- because this will cause data loss, it is strongly encouraged that application maintainers ensure they have an out-of-band backup and restore method before attempting to migrate live production installs from the previous helm implementation to a native helm one. Because Replicated's built-in snapshot and restore tooling also restores deployed application manifests, it is not a suitable solution for this migration problem.

The Helm manifests are extracted, rendered with Replicated templating, and added to base/charts.

Replicated's HelmChart spec can be modified to allow the ConfigOptions to overwrite a chart's values. This allows vendors to surface a chart's value options inside the Replicated Config page. After Replicated templating is processed on the values.yaml file, all files from the original Helm tarball are written to the base/charts/ directory, maintaining the original directory structure of the Helm Chart. A kustomization.yaml file is included in each chart and sub chart directory. This is used later to merge kustomization instructions up to the chart resources.

Example In this example, a base directory is illustrated and the base/charts/postgresql/kustomization.yaml targets chart resources:

The midstream directory contains Replicated kustomize instructions for all deployed resources, such as imagePullSecrets, image proxies, and backup labels.

Example In this example, a midstream directory is illustrated and the overlays/midstream/charts/postgresql/kustomization.yaml adds Replicated customization: 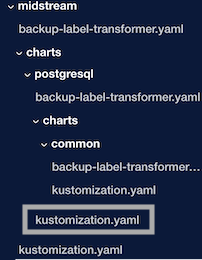 Example In this example, a downstream directory is illustrated and the overlays/downstream/this-cluster/charts/postgresql/kustomization.yaml provides a template for last-mile overrides: 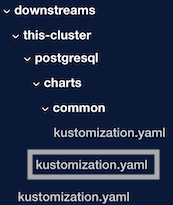 When deploying the application, Replicated walks the overlays/downstream/charts directory looking for kustomization.yaml files. Upon finding them, the app manager will run kustomize build on the files. The resulting manifests are packaged together into a new tarball for Helm to consume.

The app manager finally runs helm upgrade -i chart.tar.gz. The helm binary processes hooks and weights, applies manifests to the Kubernetes cluster, and saves a release secret similar to sh.helm.release.v1.chart-name.v1. This secret is how Helm tracks upgrades and rollbacks of applications.

Replicated finally runs the following command: helm upgrade -i chart.tar.gz --timeout 60m -n {namespace}. The helm binary processes hooks and weights, applies manifests to the Kubernetes cluster, and saves a Release secret similar to sh.helm.release.v1.chart-name.v1. This secret is how Helm tracks upgrades and rollbacks of applications.

When a Helm chart-based application is installed in an air gap environment, the processing of the chart is managed in the end customer environment (with the kots CLI or as part of the Replicated admin console). This means that the customer supplied values, license values, and existing values can be used to create the deployable manifests.

In both online and air gap scenarios, the resulting deployment is comprised of raw Kubernetes manifests. Therefore, cluster operator's are always able to view the exact difference between what is currently deployed and what the update will deploy. This level of change management provides the necessary transparency to provide the level of assurance that cluster operators require.

Optionally, you can specify the Helm version in the HelmChart custom resource. Valid options are v2 and v3. For more information, see HelmChart in the Custom resources section.

Support for Helm v2, including security patches, ended on November 13, 2020. If you specify helmVersion: v2 in any HelmChart custom resources, update your references to v3. Replicated will remove support for Helm v2 in the near future.